A rubber egg or naked egg can be made letting an egg sit in vinegar (a.k.a. acetic acid) over the course of a day or two. The outer shell of the egg is made of almost entirely calcium carbonate and the vinegar will dissolve this hard outer shell over time. The reaction between the calcium carbonate (base) and vinegar (acid) is an acid base reaction. This means we know that the products of the reaction will be a salt, water and carbon dioxide (since one of our reactance is a carbonate). The salt formed is calcium acetate which is able to dissolve in water. This means that vinegar will nearly totally dissolve the shell of an egg leaving you with a rubbery, water balloon egg.

There is also another interesting scientific phenomenon you could look for while making a rubber egg, osmosis. Osmosis is a term used to refer to the movement of water across a semi-permeable membrane from high concentration to low concentration. In this case the semi
permeable membrane is the white skin like layer between the shell and the egg white. A semi-permeable membrane has miniature holes in it like a sieve which will only let through very small molecules such as water and not lager ones such as sugar or fat. This is interesting because water will move from the vinegar into the egg. This is because vinegar is usually about 95% water so it has a high concentration of water compared to the contents of the egg. This means the water will want to go from the vinegar where its concentration is high and into the egg
where the concentration of water is lower and eventually the egg will start to swell and finally burst. 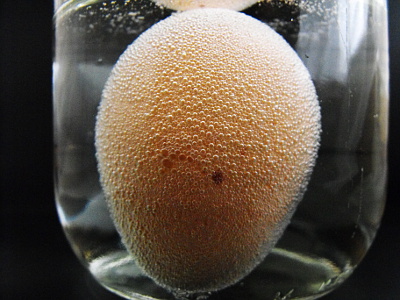 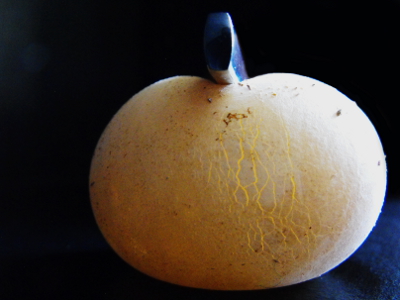 Place the egg into the glass carefully. Then pour vinegar into the glass with the egg until it is fully submerged. I used 2 cups (500 ml) of vinegar when performing this experiment, but you could use less since the amount does not have to be exact. Although if you do not put enough vinegar in there will not be enough to react with the egg shell and if the happens you can just add more vinegar (if bubbles stop forming on the surface of the egg you know the reaction will have stop). Now all you have to do is watch and wait. It will take a day or two to fully dissolve the shell depending on the concentration of the vinegar. When the shell has dissolved pour off the vinegar and take out the egg. You can check to see if the egg has finished by poking it gently with your finger, it should feel rubber and not hard. If the egg bursts while it is still in the due to osmosis just pour it down the drain. Now that you have a shell less chickens egg which is really just
one large cell take a torch and have a look inside it by shining the light through the membrane. Once you have finished exploring the rubber egg you can dispose of it by putting it into a sealed plastic bag and throwing it into the rubbish bin.

When I preformed the rubber egg experiment I thought it might be good if I then boiled the shell less egg and used it for the egg in a bottle experiment so I could get two experiments for the price of one egg. As it turns out the increased water content in the egg white makes it unstable and thus not suitable.

Go back from rubber egg experiment to HOME