Law of Conservation of Momentum
Fundamentals of Physics

The Law of conservation of momentum is a very important concept in physics. If two masses collide then we know that before and after the collision the total momentum from both objects does not change. Momentum always has to be conserved it cannot be created or destroyed in a closed system. 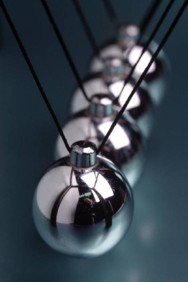 Momentum is defined to be mass times velocity. For example, if we take a pistol which is loaded with a bullet the gun is not moving so we do not have any momentum. When we fire the pistol we still do not have any momentum even though we have kinetic energy which was not present before. As the bullet is fired from the barrel the pistol experiences recoil. The recoil has the exact same force as the bullet.

In a closed system where there is no interference from outside forces, momentum cannot be created. This means when the bullet pushs off from the pistol both have the same amount of force being applied and because momentum is a vector it cancels out. A vector has both magnitude and direction, this means when two objects in a closed system go opposite directions with the same magnitude it’s just like negative one plus positive one, equalling zero.

It may seem a little strange that out of one end of the gun comes out a bullet at high speed. At the other end with the same amount of momentum the pistol recoils at a very low velocity (depending on the calibre). The reason the gun and the bullet don’t shoot off in opposite directions at the same speed is because of the law of conservation of momentum. The pistol has more than a 100 times more mass than the bullet. According to the law of  the conservation of momentum the gun would move with a hundredth of the bullets velocity in the opposite direction.

This is the mathematical equation which represents momentum.

Go back from "Law of Conservation of Momentum" to home.