A gyroscope looks like a spin top mounted on an axis in a cage and seems to defy the very thing that makes most objects crash into the ground, gravity.

The question is how do they do this?

The secret lies in the rotary motion of the disc inside the cage. When it spins the axel wants to keep its position this occurs due to the conservation of angular momentum. Just like the conservation of linear momentum if I double the mass of the spinning disk the disk will spin with half the speed. Angular momentum is the reason you can balance gyroscopes on the tip of a pencil or even a sewing needle. This is also the reason gyros can be found in everything from the
Hubble space telescope to the current generation of iphone.

It is useful in all these objects because it remains in its position which helps the computer to accurately measure an object’s position in 3D space. A gyro will resist any force trying to change its tilt, but with enough force this can be done. A gyro does not actually stay fixed in place when gravity or another force exerts torque on it makes it rotate in circles around its axis. This is known as precession. There are two forms of precession torque- free and torque included precession also known as gyroscopic precession. Precession occurs when there are two opposing forces angular momentum and torque. 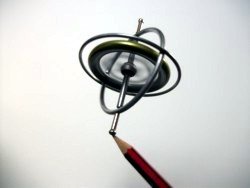 This is why gyros that need to stay stationary are usually mounted in a set of gimbals. This reduces the torque felt by the gyro from outside forces. A set of gimbals is usually a contraption
consisting of 3 rings sometimes more sometimes less. These rings let the gyro’s axis stay in place regardless of what the object outside it is doing and this is an important feature in the
gyrocompass. Aeroplanes use gyros to tell the pilot exactly what position the aircraft has, pitch and roll. Despite all its practical applications it is still being sold as a toy.

The gyro in the form we know it as today was invented in 1852 by Jean Bernard Leon Foucault (1819-1868) who was a French physicist. Johann von Bohnenberger developed an early device which the gyro was based on in 1817. The French physicist, Foucault developed the instrument in order to study an object’s movement in relation to the Earth’s rotation. He was the one to name the devise "gyroscope" which has its meaning based in the Greek language. Gyros meaning "rotation" and skopien "to view" this relates back to the experiments Foucault was performing.

Gyros have made advances since their early days in the 1800’s. Now they are being manufactured to within microns and they even make them without any mechanical parts, but still following the same physics principles. A FOG or fibre optic gyro consists of a coil of optical fibre, a laser and a detector which detects changes in the beam. Also a very similar devise called RLG or ring laser gyro works with a laser, but it is more accurate than both the mechanical and the
fibre optic gyroscope. The non-mechanical forms of gyro do not resist movement as the mechanical ones do. Gyros seem so simple, but they are very significant when it comes to navigation and stabilization.

Go back from the Gyroscope page to the home.