A Non Newtonian Fluid is a liquid that does not follow the rules that all other liquids follow. These rules or laws were discovered by Sir Isaac Newton hence the name.

He basically stated that a liquid cannot change its viscosity (resistance) provided that pressure and temperature stay the same. This means that if you stick your hand into Newtonian liquid, water for example, you can move your hand around slowly or fast and it feels almost the same. 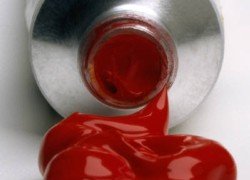 An example of a shear thinning fluid can be found in your bath room. Toothpaste which comes out of the tube quiet easily but once it not under as much pressure any more it stays quite firmly on your tooth brush.

These properties can also be seen in ketchup. It stays in the bottle quite well, but when you’re trying get a little bit out by banging on the end a whole lot of it just splashes out.

Shear thinning properties can be very useful sometimes. Non-drip paint comes out of the pressured compartment through the sprayer nozzle easily but when it hits the wall it’s not under as much pressure anymore so it firms and thus does not drip.

If I have ever made any valuable discoveries, it has been owing more to patient attention, than to any other talent.
--Isaac Newton--

On the other hand there is a shear-thickening fluid which becomes more resistant to force in a sudden impact but is liquid like when not under pressure. A classic example for that is oobleck. If you were to get a bag you could pour in a shear thickening fluid, but then if you were to punch the bag on impact it would feel solid. These properties also have some uses when it comes to
saving lives. Sudden impacts like a bullet would cause some shear thickening fluids to thicken so it makes for light, flexible and effective body armour.

The silly putty in our experiment  also has the properties of a sheer thickening fluid.

These interesting fluids have use, but many more are still to be discovered.

Return from non Newtonian fluid to forces and motion.
HOME