Static electricity can build up on some surfaces causing there to be an imbalance of positive or negative charges. When the potential difference becomes great enough a spark can jump through the air from the negative to the positive. This is called a discharge and it makes a whip like cracking sound and a flash. Static electricity is electrical potential enery and the leyden jar was invented to store this energy and then relase it in one burst when required.

A wonderful example of a static discharge can be seen when lightning strikes. The high voltage bolt can travle a great distance in order to discharge into the earth. The discharge causes the air molecules to become so hot that they enter the 4th state of matter, plasma for a brief amount of time. This happens with a spectacular flash and a thunderous sound. Although discharges are not always as impressive, they can be observed in
everyday life or more often felt. I think most of us know what can happen when we scuff our feet on the carpet charging ourselves with static electricity then we go in search of an unsuspecting victim to shock. The result is a small amount of pain and a surprised victim.

Just like magnets like charges repel each other and opposite attract. This can be seen when someone with long thin hair becomes either negatively or positively charged. Their hair will stick up from the head because each hair has the same charge they repel each other. If each hair were to have the same charge all the hairs would cling together and lie flat on the scalp. 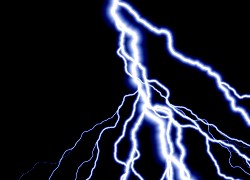 There is a trick that most people are familiar with where you can stick a balloon to a wall or even the ceiling. This is done by first rubbing the balloon over your hair where it collects charges
creating an imbalance on the balloon. Then it is held to the ceiling where it seems to magically stick. Although really what’s happening is the balloons unbalanced charges are attracted to the opposite charge in the wall and as I mention earlier opposite charge attract each other. Then eventually the charges leak off the balloon and it falls to the ground.

Static electricity can be built up and become stronger on people and objects. Although over time the static charges leak away. A Leyden jar is a capacitor which can store static electricity for quite a while. The Leyden jar was invented by the separate workings of Ewald Georg von Kleist of Pomerania and Dutch physicist Pieter van Musschenbroek. The jar was used for storing an electrical charge for scientific experiential purposes. A Leyden jar is actually quiet simply constructed and as the name suggests it uses a jar. The glass jar acts as the insulator between the two metal foil surfaces one being negatively charged and the other positively charge. The Leyden is then charged and the two pieces of metal each gain opposite charges of the same magnitude, so one piece would be negative and the other positive. When the static electricity builds up enough a spark jumps from the negative electrode to the positive making an impressive spark and giving both electrodes a neutral charge once again.

Go back from 'Static Electricity' to home.