Newtons third law of motion states that; For every action, there is an equal and opposite reaction.

In other words when a force is applied on a body, the body pushes back with a force of equal magnitude and opposite direction. This means whenever you push something it will push with the exact amount of force as you do no more and no less.

If a car crashed into a brick wall which imparted more force the brick wall or the car? Well in fact it’s a trick question because they both imparted equal amounts of force on each other. The same would be true if a speeding bullet hit a piece of paper, the bullet would only impart as much force as the paper on the bullet. This law also applies to long range forces such as magnetism and gravity. 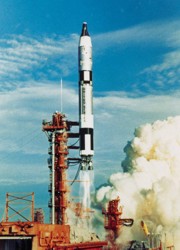 The law is demonstrated very well by rocket propulsion. Some people still believe that rockets need something to push against to be able to propel the rocket forward. Though, now we definitely know that this not the case because we have been able to propel ourselves forward in outer space. Space is a vacuum and there is virtually nothing to push against. Unlike in a swimming pool where you can push against the water to get you to the side of the pool in space
you would be trapped unless you preposition. This means the only way to explain that a rocket can propel itself in space is Newtons third law. However the law of the conservation of momentum would also give a satisfactory answer.

If you imagine the rocket as a gun they are fundamentally quite similar in the sense that they both eject something. In the case of the gun a solid bullet is propelled from the barrel and in the
rocket it expels matter at high speeds. Just like a gun is pushed back (which is called recoil) when the bullet is fired a rocket is pushed forward when the exhausts are expelled.

Go back from "Newtons Third Law" to home.