A popular desktop toy, the Newtons cradle, is strangely fascinating. This toy is not only entertaining, but it also demonstrates the law of conservation of momentum and energy. 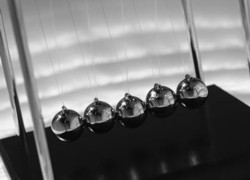 The contraption usually consists of an arrangement of 5 identically sized metal balls. Each ball is suspended from a frame by two wires in a v formation and touches both balls either side of it. A
Newton’s cradle’s efficiency is heavily reliant on the elasticity and equal mass of the balls. When I say elastic I don’t mean stretchy, I am actually referring to something which returns to its original shape and does not dissipate the kinetic energy as heat.

To every action there is always opposed an equal reaction.

If you have ever played with a Newtons cradle you’ll know that if you let one ball swing and hit the others only one will swing up on the other side. This seems to know every time how many balls you let swing. If you let two balls swing they hit the others and two swing up the other end. Even if we lift up four would swing up at the other end even if there are only 5 balls in the cradle. One might think that if you let two balls swing at one end then one could swing up on the other end at twice the speed this would mean momentum is conserved. Although this would not work because kinetic energy must also be conserved in a Newtons cradle.

If I shoot two projectiles with the same mass out of a barrel with exactly the same amount of force the kinetic energy and the momentum will be equal in each projectile. If I were to make one projectile double the mass of the previous, but only used half of the force we previously used to move it, it will still have the same momentum as our first two projectiles. Although the momentum is the same the kinetic energy is not because the amount of force to launch the projectile is only half as much so it only has half as much energy.

Go back from "Newtons Cradle" to home.