Forces and motion is the foundation of a lot of things in this world, but you don’t want to be around when those forces are unleashed.

We wouldn’t have night and day if the earth didn’t move; the rotation of earth gives us what we call sun rise, sun set and everything in between. Physics is the subject that tries to explain why
things move and how they move.

The alternation of motion is ever proportional to the motive force impressed; and is made in the direction of the right line in which that force is impressed.
--Isaac Newton-- 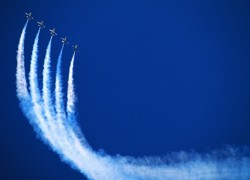 Understanding forces makes life a lot easier in some aspects. Have you ever wondered why you can lift heavy loads with ease when you use a wheel barrow or how a wrench can easily tighten bolts? The secret behind these labour saving devices is the use of force efficiently in
the form of a lever.

One of the great achievements of the human race is human flight this achievement is also thanks to forces and motions. The question with aeroplanes is not how they move forward, but how they
stay up because unlike helicopters they don’t have a propeller on top. The answer is in the wings and how they turn the air rushing over them into lift. Not everyone is an aeronautical engineer so some people would find the answer to why planes don’t drop to the ground like rocks useful, but if you have ever attempted to make a paper aeroplane you
will know how useful it can be.

Liquid  usually behaves well... like liquid when you pour itinto a container it takes on the form of the container. When you poke it, your finger goes straight through with little resistance. Sir Isaac
Newton said this in one of his theories and all liquids that behave in a water like manner are called Newtonian fluids. Then there are the non Newtonian fluids which behave in very interesting ways. Instead of easily parting when sudden force is applied it resists and it is like hit something solid.

Go back from forces and motion to home.