The collision theory states that for a reaction to occur the reactant particles must collide with the correct orientation and with sufficient energy (activation energy). The theory explains how chemical reactions happen and why the rate of reaction of a particular reaction is influence by certain factors. This theory is relevant to every chemistry experiment / chemistry science fair project. The factors which effect the rate of reaction ( how fast the reaction occurs) should always be considered to ensure that the experiment is fair.  Otherwise you may inadvertently produce invalid results, just by performing a series of experiments over multiple days which were different in temperature. 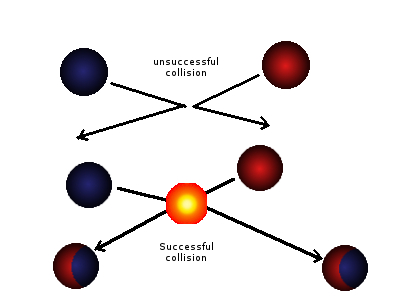 Particle theory states that all matter consists of particles (these can be atoms, molecules or ions) and these particles are always in continual motion. Even when the substance is in a solid state its particles will still vibrate in their fix position. Substances which are in a gaseous or liquid state have particles that move freely and are constantly colliding with other particles. Not all of these collision result in a reaction only the collisions between the reactant particles with the correct orientation and with enough energy will react. This minimum amount of required for the reactant particles to react is called the activation energy, in other word the energy required to activate the reaction. The collisions resulting in a reaction are referred to as successful collisions.

The collision theory helps us to understand how temperature, concentration, surface area and the presents of a catalyst affects the reaction rate. There are also other factors which influence the rate of reaction, but these four should be sufficient for a school science fair project. One of the factors which I think may be the hardest to control and is temperature because if you perform several test over the course of a couple of day the temperature can vary greatly from day to day.  On a colder day the rate of reaction decreases and on a warm day it increases. This may lead you do believe one reaction was faster than the other when in reality this may not be the case in a fix temperature environment.

When temperature is increased the amount of kinetic energy each particle has increases. This means that they will be moving faster which results in more collisions per second. Also when kinetic energy of the particles increases they are more likely to collide with enough energy to react successfully, overcoming the activation energy.

Concentration is another factor which can influence the rate of reaction. Concentration refers to the amount of substance within a given volume. For example, if I increase the concentration of hydrochloric acid there will be more HCl particles within a certain volume. When the concentration of a reactant increases the rate of reaction also increases. This is because the increase number of particles in a certain area increases the likelihood of a successful collision. A good way to visualise this is by think of the particles as children running around in a room. By adding more children you are increasing the chance of two running into each other.

Return from "Collision Theory" to the home page.