There are three basic states of matter, solids, liquids and gases. These are the first three, but I am also going to talk about the fourth state after gas which is called the plasma state. The world is filled with matter it makes up every day things from the air around us to the ground we walk on.

Carbon dioxide is interesting because if you were to freeze it the solid carbon dioxide would turn straight back into gas if the temperature is above -78.5⁰C /-109.3 ºF without passing through the
liquid phase. This process is called sublimation. Most substances go from solid to liquid and then to gas, but solid carbon dioxide does not turn into liquid under normal atmospheric pressure this is why it is known as "dry ice."

When matter is heated the atoms start to move around turning the heat energy into kinetic. On the other hand when atoms are cooled they usually bunch together. I say usually because there are exceptions to the rule. For example when water is cooled passed 4⁰C or 39⁰F it expands but, other substances usually bunch together when they become colder or more pressure is applied.

The solid state of matter occurs when there is not enough energy to keep the atoms apart and so they form bonds with each other. When matter is solid the atoms still have energy and vibrate. The atoms are not completely still until absolute zero is reached.

The second state is the liquid state this is when the atoms get enough energy to break their bonds and slide freely over each other like water at room temperature. Some liquids are more dense than others, but a liquid can usually be defined as a substance that has no particular shape that will take on the shape of the container it is put into and as a substance that cannot be compressed. These properties make liquid hydraulics possible because liquid cannot be compressed and flows easily.

The gasesous states of matter occur when the atoms have enough energy to move around freely. Unlike the solid and liquid states of matter gases can be compressed because there is room between the atoms. When matter turns into a gas the atoms spreads out. They whizz around and the more energy they have the more they spread out, as if each atom were a bouncy ball. 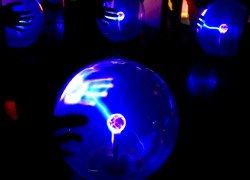 Plasmas are not as commonly talked about as the other three states are in our everyday life but, you may be surprised to discover how common it is. Plasmas are actually the most common sate for matter to be in this universe. Plasma is the state after gas. When gas is heated to very high temperatures the electrons separate from the nucleus and this creates an ionized gas or plasma. Sir William Crookes an English scientist in 1879 identified "radiant matter" in the Crookes tube. This "radiant matter" was later in 1928 named plasma. To reach the plasma state a gas has to become very hot and this happens when lightning strikes. The sun is made up of plasma and so are most other stars. Plasma can also be found in neon lamps and plasma balls. Plasma balls are filled with a pressurized inert gas and then a high voltage current is passed through the gas  heating it and forming plasma.

Matter changes state all around us if we notice it or not. The weather cycle is a very good example of this as the water evaporates it rises into the sky were it cools and turn back into a liquid and falls as rain. Lighting flashes and turn the air around it into plasma. Hail falls when the liquid water collected in the clouds turns solid and then it falls to ground as ice. Understanding the different states of matter will help you understand the building blocks that make up this planet.

Go back from states of matter to home.