Ginger beer is a refreshing drink that originally originated from Britain in the 18th century. Nowadays it is sold as a soft drink which is basically just water, sugar, ginger flavour and carbonation. It was originally made using a more scientific way, it involved the use of fungi called yeast.

Yeast is in a very common ingredient in bread and wine. The reason that it is used in bread is because it produces carbon dioxide which is a gas and it causes the bread to rise. It is used in wine because the ethanol it produces is what make wine alcoholic.

In biology terms yeast is a living organism that feeds on carbon based sugars via extra cellular digestion. Extra cellular digestion is where an organism digests food around it by excreting enzymes and then absorbing the finished product. Yeast is used to make bread rise by emitting
carbon dioxide and we will use it in our mixture to carbonate the drink. The fungi also produce ethanol as a waste product which is why many people are looking to micro organism to produce fuel in the future.

Making the ginger drink is something I would categorise under biology because of the important part the micro organism yeast. This experiment illustrates some import biological concepts such as the effect ph has on microbial growth, respiration and fermentation. The trick is making the conditions just right so the yeast can live and thrive in the mixture. Yeast actually prefers a slightly acid environment with a pH of around 5. The low pH is beneficial because bacteria generally don’t like acid environments so it will inhibit bacterial growth. After a while the yeast will also produce carbon dioxide as a waste product and the carbon dioxide will dissolve form
carbonic acid lowering the pH even more.

The yeast produces the carbon dioxide and the ethanol through the process of respiration. Yeast can perform a process called anaerobic respiration where it can turn sugars such as glucose into
energy without oxygen. Humans also respire along with all other plants and animals. 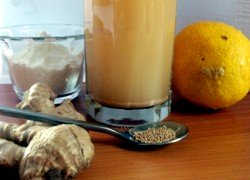 How to make ginger beer

Sterilize the 1 litre soft drink bottle. Don’t use glass bottles because there is a risk of an explosion due to the carbon dioxide produce by the yeast which raises the pressure considerably
inside the bottle. Once the bottle is sterilized put warm water around 30-35 ⁰C into the bottle leaving enough room for the other ingredients. Squeeze in the lemons. Then add the sugar, ginger and cap of the bottle and shake it well making sure the sugar is mostly dissolve. Finally you can add the yeast and shake the bottle again. Make sure that there is a small pocket of air where the pressure can build up. This is necessary for the carbonation process which will give the ginger beer the familiar fizz.

Store the bottle somewhere warm for 24 hours, once the time is up squeeze the plastic bottle forcefully if you can dent it then let it sit a little longer until it resists your force. Although don’t let it sit to long 2 day or longer because the pressure will build up so much there will be a possibility of an explosion. When it has finished fermenting filter out all the sediment and then you can store it in the refrigerator for up to a week.

There will be a small amount of alcohol (ethanol) produced usually less than .5% in this experiment.

Go back from 'Ginger Beer' to home.