Stay update and subscribe to "Science News For Kids" our monthly e-zine. 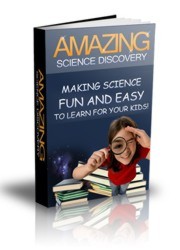 Take a picture of an everyday scientific phenomenon that truly captures the essence of what science is. Capture the amazing and exciting nature of science. Find an everyday scientific phenomenon and make the ordinary look extraordinary. Add a caption which should include such things as where the photo was taken, when and what scientific principles are being displayed. Most everyday occurrences can be explained by science, such as the illusive rainbow which has some very interesting physics behind it.

The winner of this competition will recive the "Amazing Science Descoveries" e-book series from our sponsors www.amazingsciencediscovery.com. The book is mainly aimed at the parents of children who are currently 1st to 5th grade. The e-book talks about the importantance of encouraging an interest in science from a young age, which I whole heartly agree with, since an interest in science will most certainly be benifical for any child. The book provides parents with information on their childs curiculim and the seires also includes easy science experiments which are ideal for parents to teach young childern about science while also having fun.

How the judging works

Submissions are judged by site visitors (or friends and family) through the use of social networks. The winner is then picked by the team at Easy-Science-Experiments.com taking into consideration the number of points the participants received, the quality of the photo and the caption. Note: The caption does not have to correctly state what is observed in the photo it merely has to be a good educated guess with reasoning. Site visitors are encouraged to comment on the photos and enhance/ correct the caption with their own insight, knowledge and experience of the phenomenon.

Vote by Clicking the Buttons


We take no responsibility for submitted work, and if one submission fails to meet the requirements we reserve the right to delete this submission. By submitting original photos, you retain copyright and grant Easy-Science-Experriments.com a non-exclusive, royalty-free, irrevocable, transferable, perpetual license to publicly display the photo.

The digital photo contest started officially 10th July 2012. The contest ends on the 10th September 2012. The winner will be announced on this page, Facebook and Twitter. 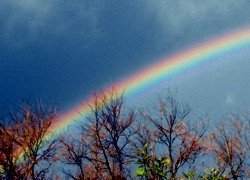 This photo was taken at midday.
It had been raining all morning and the air was filled with small water droplets. The light from the sun (white light containing a full spectrum of wavelengths) is refracted by the small water droplets in the air. The light is refracted as it moves from one median to another causing them to slow down and change direction. The reason, that we see rainbow as colourful bows instead of just white bows of light is because different wave lengths of light are affected more or less when they change medians. Red light being affected the least and blue / violet being affect the most. Every little droplet refracts all the colours of the rainbow, but because the rays are sent off at different angles you only see a certain wavelength (colour) from each droplet creating the tiers of colours.

Note: Your submission does not have be this comprehensive.

Do you have a great photo that meets the critera

Go back from "online science contest" to the home of easy science experiments.

All experiments have been tried and tested by me.This site uses British English.
Powered by Site Build It! Copyright © 2011-2012 Karim Cisse. All rights reserved.