The pinhole camera is very simple in the sense that all you really need is a light proof box with a hole in it and some film. 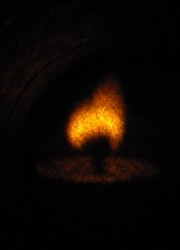 The reason cameras need lenses or in this case a small hole is to focus the big picture into a small point on the film. These cameras are so simple they have only one drawback and that is the amount of time it takes for them to capture an image through the pin hole. This is because not a lot of light can get through the tiny hole.

The reason cameras with lens are able to take pictures faster is because they take a lot of light and then focus it on the film. Just like a magnifying glass which is able to focus the suns light into a small bright and hot point. Whereas the pinhole would also focus it to a small point, but that point would not be bright or hot.

How to make a pin hole camera

Cut your cylinder 3cm from the top and between the two pieces place the wax paper. The wax paper will act as a translucent barrier catching the light and making it easier for you to see the image. If you actually want to take pictures rather than using it as a pinhole viewer just replace the wax paper with film. Although taking pictures with it makes things a little more complicated because the film will have to be put in and taken after each picture in complete drakness. Otherwise it's simple really all you have to do is uncover the hole in the black card when you want to take a picture and then cover it again when you’re finished.

Why is the picture inverted in a pinhole camera? 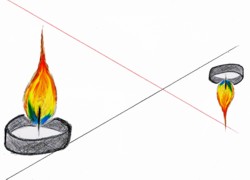 This naturally also applies to the light travelling up towards the camera from the ground meaning the ground will be at the top of the film. The pinhole camera illustrates two important points. Firstly that light travels in a straight line and secondly that light bounces off objects in all directions.

Go back from "Pinhole Camera" to home.