Hot ice will not become super cooled if it is cooled in the presence of a nucleation site so it will freeze just like normal. Like nearly everything super cooling has an opposite, superheating this happens when a substance is heated to or above its boiling point, but does not boil. Super heating sometimes occurs when pure water is heated in the microwave.

How to make Hot Ice

The main ingredient is basically sodium acetate, but that isn’t really something that’s easy to find at just any store. Unless you look for hand warms which usually contain sodium acetate trihydrate. I bought my sodium acetate anhydrous here on Amazon for about $14 USD. 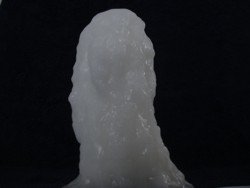 First put a tiny bit of water into a pot because you only need 1ml of water for about 5.3 grams. Sodium acetate is not toxic so you can just use a normal pot to heat it in. Just make sure you wash it well after you used it. Sodium acetate is actually used as a food additive in some salt and vinegar chips.

Heat up the water and slowly add the sodium acetate. Once you have dissolved all of the sodium acetate take it off the heat and pour it in to a heat proof container (something that won’t melt when you pour in the hot liquid) and close the container as quickly as possible. If the container is not covered the top layer of the liquid will crystallize and this will cause the liquid to freeze before it becomes super cooled.

The container also needs to be clean and have smooth edges so there is nowhere for the crystals to form. Once it is cool to the touch it will be ready to use. All you have to do is to initiate the solidification of the liquid by adding one of the left over crystals. When you want to reuse the solid crystals just heat it up until all of it has melted and then cool it down again. You can keep reusing it as long as you don’t contaminate it and add a little water now and again to compensate for the lost water due to evaporation during the heating process.

Now what to do with the end product, well it helps to use your imagination, but you could make sculptures or use it for magic tricks impressing family and friends. To make a sculpture put a solid crystal on a plate and then pour the hot ice on the crystal and watch the stream of liquid solidify on contact. This experiment also makes a good magic trick because the liquid looks like water, but when it’s brought into contact with a solid sodium acetate crystal it freezes. This can look quite impressive.

Go back from "Hot Ice" experiments to home.