Water rockets display two very important laws in physics, the law of conservation of momentum and of course Newton’s third law. This makes it a very good science activity, but really it’s a fun
weekend project to do too. Designing rockets also helps with the understanding of simple aerodynamics, as the body of the rocket will directly influence the flight path, the height reach and the descend.

How does the rocket work?

The rocket works by releasing a large amount of pressure through a small nozzle producing thrust. The water is pushed out at high speed and as Newton’s third law states that for every action there is an equal and opposite reaction. The water squirting out of the nozzle is the action and the rocket flying into the sky is the reaction. The reason that water is used instead of just air is because it has a lot of mass. The reason we have two thirds of the bottle filled with air is because unlike liquids, gases can be compressed. This means that as you pump more and more air into the bottle the pressure starts to rise and the air molecules bunch up together. Just
like a compress spring the gases rapidly expand when they are released shooting the water out and the rocket up. 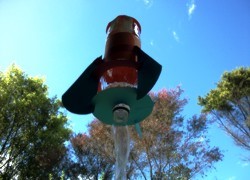 Water rockets are perfect for young and old rocket enthusiasts alike because they are fairly cheap to make and are not too dangerous when used responsibly. Some people use special launchers to launch their rockets. This means bottles they can be pressurised to an excess of 100
psi (which I do not recommend), but with a cork the pressure inside the bottle will not get nearly as high. As long as the cork is not wedged in too tight the soda bottle should hold up just fine. Although there is still the danger of the rocket hitting a person, but this can be easily addressed with a make-shift launch pad, fins and by choosing a wide open area as your launch site.

How to make the water Rocket?

All you need is:

First of all find a PET soda bottle with a good streamline shape. Turn the bottle upside down and make sure the cork fits and provides a good seal. Drill a hole through the cork so that the hole is
smaller than the air valve allowing the air valve to be forced in ensuring secured fit.

The next order of business is to attach fins to the rocket. You can do this by cutting three right-hand triangles out of flexible plastic and two thick rings. One ring must be big enough to sit nicely on the body of the bottle and the other must only slid passed the opening of the bottle. Then cut two notches in each fin so they can be attached touching the body of the rocket and with both rings running through them. Use epoxy to attach the fins and rings.

Now you can add a nose cone which will improve the rockets aerodynamics and it will also act as a crumple zone on impact. The cone can be made simply with a piece of hard card, rolled into shape and cello taped down.

Now that your water rocket is finished, you can start on building a launch pad which would be beneficial to the rockets flight path. The launch pad can simply just be made out of three long straight sticks jammed into the ground around the rocket. This will prevent the rocket from veering off course during takeoff.

To prepare for takeoff find somewhere where there are no houses or innocent bystanders who could be hit by the rocket during takeoff or landing. Make sure a responsible adult is present and that you have taken all necessary safety precautions. Then fill a third of your rockets total capacity with water. Jam in the cork and the air valve which should be connected to the foot pump. Then start to pump and prepare yourself to watch Newton’s third law in action. Blast off!

Go back from "Water Rocket" to home.