Silly Putty
Known too as, Flubber, Slime and Gak

Silly putty was invented in 1943 by engineer James Wright. He was trying to find a synthetic rubber that could replace the natural rubber which was in short supply.

In World War II Japan attacked rubber producing countries in Asia considerably reducing the supply of rubber to the U.S.A. Rubber was one of the most important resources during World War II and it was scarce. The government funded the research into synthectic rubber which would be able to substitute natural rubber. James Wright’s invention was not able to replace rubber because it was lacking the properties that rubber possessed.

Make your own silly putty, gak, flubber, or slime:

Put the borax in one bowl and add 1 a cup of warm water and stir until all of it is dissolved. In the other bowl pour in the glue and mix with ½ a cup of water and food colouring if you want it,
otherwise just leave it plain. If you do decide to put in food colouring go easy otherwise it will transfer the colour, 2 drops should do. Wash the silly putty under water to wash off any excess borax. Knead it for a while and it will become less sticky and more like silly-putty. Make sure to keep it in a container to stop it from drying out.

Genius is one percent inspiration and ninety-nine percent perspiration.
--Thomas A. Edison-- 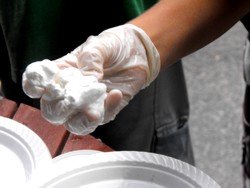 In this experiment we use PVA a.k.a. polyvinyl alcohol and borax a.k.a. sodium borate. This experiment is a way to explain polymers which are usually long chains of molecules. Borax is a linking agent and it links together the polyvinyl alcohol making a network of PVA strands held together by the borate molecules. Putty is actually a non Newtonian fluid. When you stretch it slowly it will stretch, but if you try to do it fast it will in fact rip apart.

Note: When you mix together the two bowls content you can notice that they become cooler and this is and endothermic reaction taking place.

Safety is always important so after handling the borax and the slime I advise you to wash your hands and all the utensils used with warm soupy water. Borax is toxic, PVA can irritate the skin so care should be taken.