The Bernoulli principle states that as the speed of a fluid increase, the pressure exerted by that fluid decreases. This principle not only applies to fluids, but also gases because they behave in the same way in this circumstance. This principle answers the question, how do airplanes fly? A planes wing is also a good demonstration of the principle in action.

Some paper airplanes are designed to show how the shape of the wing can create lift and this design is one of them. The construction of this paper airplane is a little bit different to the generic flat wing paper darts. 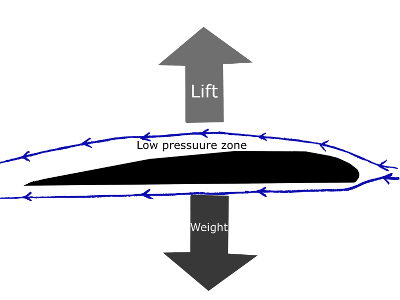 Start by cutting a 21 cm by 14 cm strip of paper from the sheet. Fold the strip in half along the length of it and secure the straw with sellotape so that it sits in the fold you just made. Now take the piece of paper with the straw in the middle a sellotape the length of it closed so that it resembles the shape of a a wing. Attach the other straw to the middle of the wing. Then put a paper clip on the front end of the straw and this will act as a nose cone. Cut out 12 cm long and 4 cm wide strip of paper. Fold this strip in half and then into half once again so that the strip as three folds on it. Attach this strip of paper on the end of the straw with sellotape. The tail wing should have one fin going up and one either side going off at 90 degree angles.

The plane has a tendency veer up ward when thrown straight and this can be explained by the Bernoulli principle resulting in it stalling and then eventual crash so it may take a bit of practise to throw it. I found it was practically good looping when thrown at a tilt or when thrown at the ground it will pull up before hitting it.